On 17 December 2020, the inauguration of the Humboldt Forum was staged online due to the pandemic crisis. From July on the various sections are expected to open in several steps within the next few months.

The new building houses the institution called Humboldt Forum, seathed by reconstructed baroque facades of Berlin Palace.
The name relates to the Humboldt brothers: Alexander the explorer and Wilhelm, the statesman and prussian reformer.

In terms of its space program and technical equipment, the concept of the institution is based on a combination of exhibitions, research, mediation and cultural, political or secular events like concerts or conferences. In official descriptions it is announced as “Centre for exhibitions and events of the Federal Republic of Germany”.

The total costs of the project  are  around 677 million euro of which 80 million euro for the historic facades will be raised by donations. This establishes Humboldt Forum as the federal government’s largest cultural project.

Three historic exterior facades, three baroque courtyard facades and two courtyard portals of Berlin Palace (lost in WWII and in 1950), were designed as replicas. The original design followed plans of Andreas Schlüter (1697) and other architects of the 17th and 19th century.

The designer of the project is architect Franco Stella, competition winner in 2007, from Vicenza/Italy. His signature can be seen on the eastern façade facing the Spree River and in the system and design of the courtyards. Together with two other offices planning commenced in 2009, construction works started in 2012.

Following an open call for historical photos and snapshots after research and evaluation of historical illustrations and models, the redesign of exterior facades was completed by Berlin based architetects Stuhlemmer. 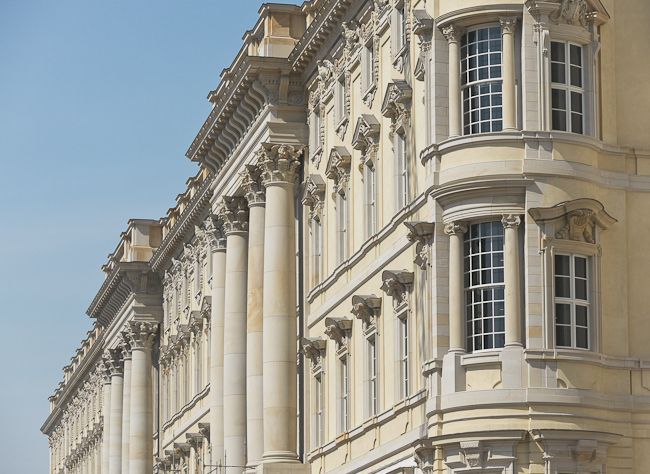 A Palace Building Hut was founded to restore and redesign the sculptures and reliefs of the façade decoration.

New formulation of the fourth façade by Franco Stella

The eastern façade of Humboldt Forum is formed by a grid façade in modern architecture. It follows the storey height of the baroque façades and is clad with slabs of architectural concrete. The coloration is related to the neighbouring baroque sandstone elements. 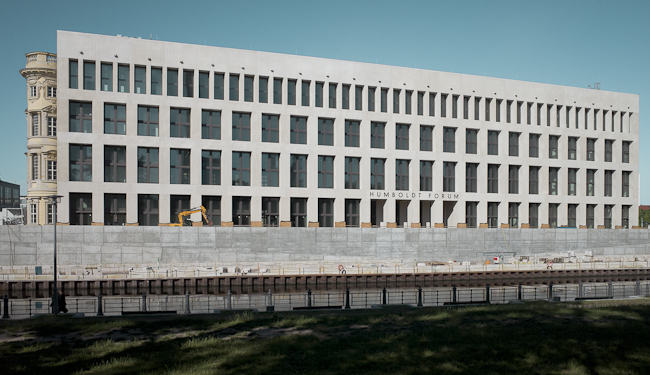 Civil engineering and shield tunneling of the U5

Underground line 5 in between the stations Rotes Rathaus and Brandenburger Tor was built underneath -during the shell construction period of Humboldt Forum. Using shield tunneling technology, two tunnel tubes were manufactured. The foundation slabs of the construction site were driven under diagonally at a distance of only 2.50 m to the foundation layer.

The open space design connecting Museum Island and the surrounding urban spaces is  a work of bbz landscapers. The works are scheduled to be completed by 2021.