Alexanderplatz  – a major construction site for the coming years

Whether in film, literature or the daily news: no other public square in Berlin stands more for the radical change and urban transformation in Berlin as Alexanderplatz with its history. Opinions of Berliners and guests are divided – for many it is a popular meeting place with sights such as the TV tower and a funny clock that shows world times and planetary movements, for others Alexanderplatz appears noisy, rundown and dangerous like in the famous novel. What changes are currently happening there?

What has happened so far

Since reunification, new high-rise buildings have been planned for Alexanderplatz. After Potsdamer Platz, Alexanderplatz was to become the second downtown location with a group of scyscrapers as these were in high demand by investors at the time.

The competition for the urban development framework plan was won in 1993 by architect Hans Kollhoff.
In the course of time, it was adapted to new requirements and developments. The tower south of the S-Bahn on Rathausstrasse on the former C&A site has already been cancelled. Buildings earmarked for demolition and new high-rise construction, such as the “Haus des Berliner Verlags” and the “Haus des Reisens”, were listed as historic monuments. In the case of projects such as the Alexa shopping center or the Hines property, the administration first approved the base floors. Towers with residential portions were not marketable in the meantime.

While several new high-rises have been built in the vicinity of Alexanderplatz in recent years, the square itself is now beginning to transform into a major construction site.

A high-rise building with a height of 130 m is being built next to the Park Inn Hotel.

Towards the square there is a basement with mixed use. In addition to apartments and commercial uses such as restaurants, a daycare center will also be built there. A roof garden with 2500 sqm and wooden pergolas will be accessible from a club located at 36 m height. 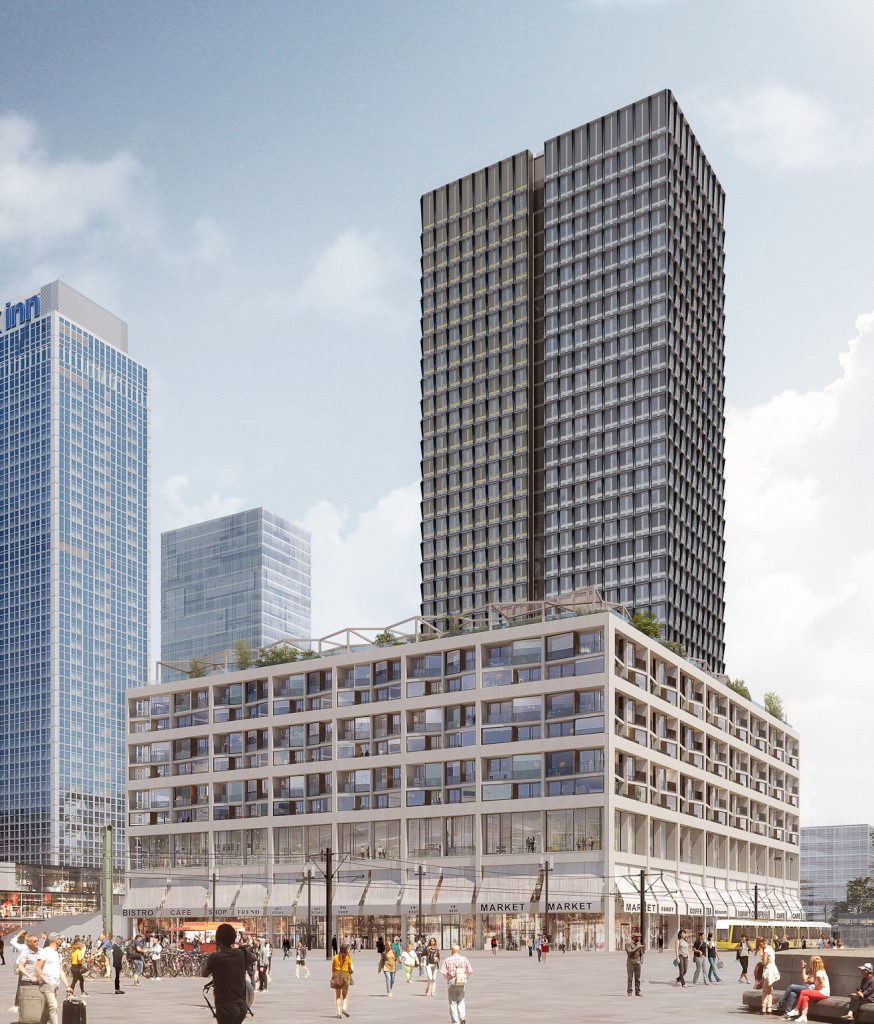 A total of 60,000 sqm of lettable space will be created, of which 30,000 sqm will be office space, 17,000 sqm will be retail space, 11,000 sqm living space with shared kitchens, and 1280 sqm as communal space.
The planned cost is estimated at 530 million euros by investor and developer Covivio .
Sauerbruch Hutton architects plan the building, and the design for the roof top garden is delivered by Sinai planning office.
The project is scheduled for completion in 2025.

Next to the Alexa department store, the foundation stone was laid on 14.9.21 in the presence of the Governing Mayor for the construction of the residential tower of the MonArch Group from Moscow with 150 m and 35 floors. 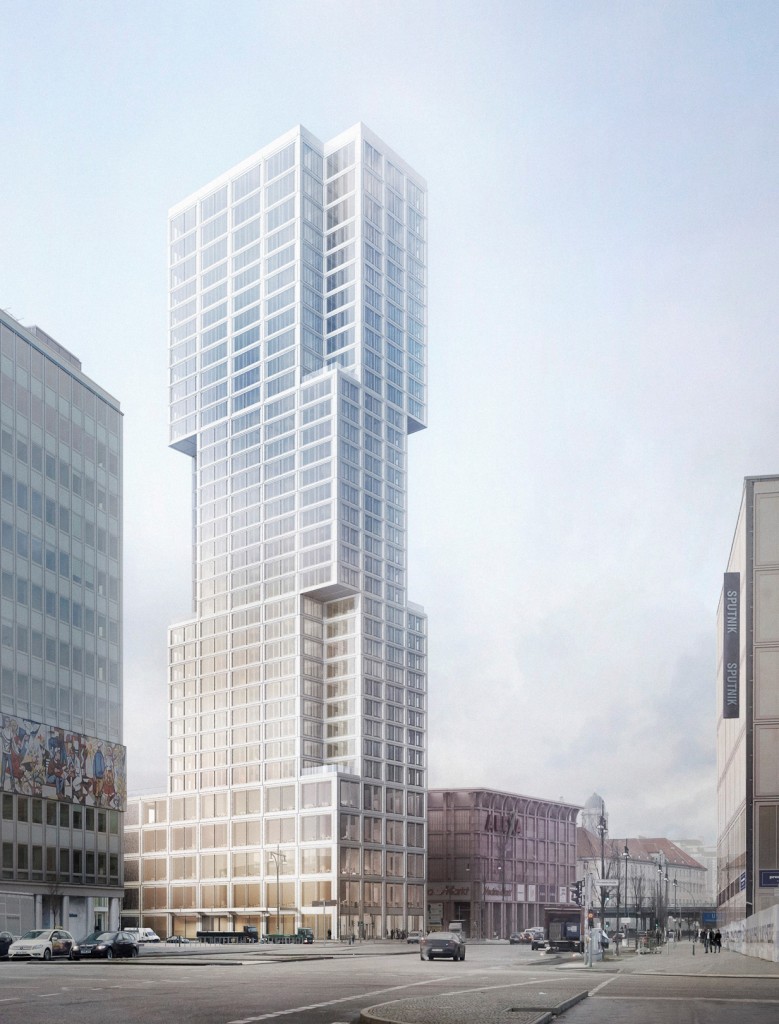 In addition to 377 apartments and penthouses, retail, gym, a spa with swimming pool and a cinema are planned on three floors at the base level. A skylounge is part of the project. O & O Baukunst is providing the architecture, and completion is scheduled for 2023.

In addition to office space, 1000 square meters of community-oriented uses are planned, a publicly accessible roof terrace at 135 meters. 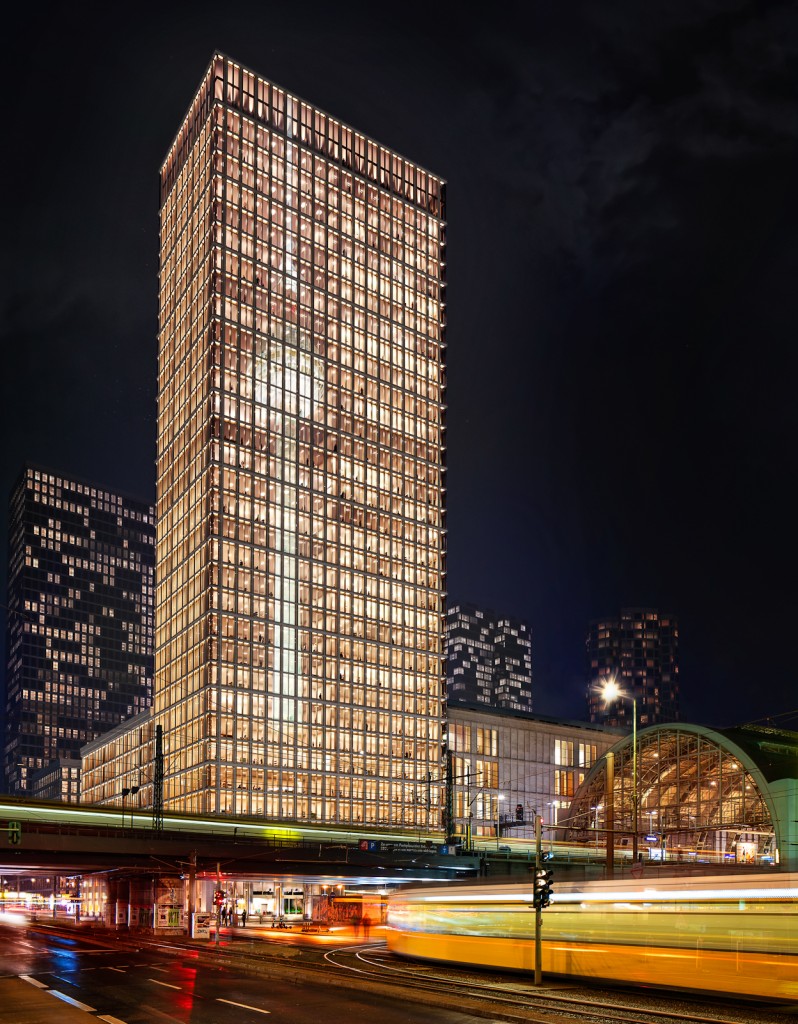 Kleihues + Kleihues, who already planned the first conversion in 2008, is responsible for the architecture. Construction work started 27 of October 2021. The project is scheduled for completion in 2025.